FAQ-13: Local Aerobic Endurance (AE endurance) workouts seem really hard to me, they do not look so “aerobic” though, what is it that I’m doing wrong?

You are not doing anything wrong really (a priori), however I will explain a little on what they are based so that you get to understand how and why you could/should adapt them to make them without being so “strenuous” (not really needed though).

To achieve the targeted physical adaptations with these trainings, the times under tension (or contraction) have to be long enough.

So, in order to make it work correctly the intensity of work has to be very low, allowing SOME BLOOD FLOW in the targeted muscles of these workouts (finger flexors).

However, experiencing a sufficient blood flow does not guarantee that you can complete the suggested volume of training.

This will also depend on the oxidative capacity that you have developed in the requested fibers of those muscles (something you can develop with these workouts).

In PRACTICE, the RECOMMENDATION THAT IS ALREADY MADE in the App to ADAPT the endurance training AE (here) is that you MUST STOP THE SESSION to recover (or also to increase the resting times between sets), as much as needed to be able to complete the training volume (or to get as close as possible to complete it).

If even with these tips and tricks still not possible to complete the workout, feel free to adapt the intensity to your judgement so you can actually complete the whole workout (in order to do this, bear in mind that you should at least work 25% under the occlusion threshold (OT-25%), which is what is established by the App, or you could also train even under lower intensities as OT-35% or -45% (whichever suits you better, so you can complete the workout with some margin over the total volume of training).

Once you get to achieve to complete the whole volume of training (with the established resting times), and also training under adapted intensities (lower), you will be able to increase them gradually (on following sessions) so you get to gradually achieve to work on the targeted intensity (OT-25%).

As you could probably work out, the key is to determine WHICH is THAT INTENSITY IN YOUR PARTICULAR CASE (because it may be different depending on the physiological profile of each individual). If these training sessions are set to a specific intensity (for example at 30% of the max force) there would be climbers (with a very high % of slow fibers and a very high occlusion threshold, beforehand) that would not manage to stimulate all the targeted fibers of this type of workouts (slow and intermediate-slow twitches).

Current scientific evidence (and own observations) has found that there is difference of about 25% between the Occlusion Threshold (OT) and the level of force that could be sustained intermittently for a long time (Critical Force – CF).

The ability to maintain an intermittent effort to the intensity of the CF is due to the equilibrium that takes place between the magnitude of the local blood flow that is given to that intensity, and the oxidative potential of the fibers that sustain that stress. But if the work:rest ratio (WRR) somehow changes (and the CF is valued with a WRR of 7’’:3’’ respectively) the intensity of the CF will also vary. Therefore the “AE” endurance workouts will be using a more disproportionate WRR (compared to the 7’’:3’’ used in the CF), so the fatigue they generate is much greater (that is the reason why it usually costs A LOT to maintain that level of effort at that specific intensity, except the case of climbers with a very high oxidative potential).

So, do use the suggested modifications to make these workouts are more “human”, and you can achieve the adaptations you really need. You have all the information about the foundation of the “AE” endurance training (and the other 5 types included in the App) here.

FAQ-14: Shall I just work on one grip type on the AE Endurance workouts?

The reason why only one type of grip is given in these workouts (and in those of ANAE endurance too) is because both are based on the execution of efforts at an intensity that is dependent on the Occlusion Threshold (OT).

Doing them in this way allows us to CONTROL when we have BLOOD FLOW locally, directing the stimulus to where we want (by controlling the prevalent metabolism that will sustain every effort) to achieve the adaptations we seek.

Given that the current evidence on the OT is still scarce and the R-Evolution Training App is based on scientific evidence, the App does not propose anything that goes beyond what SO FAR is known with certainty.

For example, it is not yet known to that level of specification if ALL finger flexors have the OT at the same exact intensity, but what it is known is that depending on the type of grip used (if that grip type involves more or less than 1 phalanx) the flexors of the fingers (profundus VS superficialis) will have a different level of engagement (Vigouroux, Quaine, Labarre Vila & Moutet, 2006).

Having said this, training on other grip types than the specific one used to value your OT could mean that we are not achieving the desired stimuli on the muscles involved on those grip types.

However, being SMART (and I don’t think we will be off beam at all) it would be worth to add an additional grip type (involving 2 phalanges, for instance) than the one proposed on the AE Endurance or ANAE workouts, basically assuming that we had the OT at the same intensity on both ways of holding the hold.

This would bring more variety to the workouts as well as make them more complete.

If you are going to do the workouts in two different grip types, the procedure is the same:

Also, It would be RECOMENDABLE to share the proposed volume of these workouts between the types of grip you would like to train…

FAQ-15: On the App there aren’t any workouts on pinches, don’t we have to train them?

According to the specificity training principle, the answer would be “YES, if you are going to climb on this style” (what is usual in 99% of the cases).

Training CORRECTLY on pinches will increase your performance on this type of hold (strength/endurance) and it will strengthen some tissues/structures that are requested to a greater extent when using them (such as collateral ligaments of interphalangeal finger joints or wrist stabilizers, for example).

However, training them badly (which is what happens if you train them dead hanging) could generate certain imbalances in the intrinsic muscles of the hand, maximizing too much the lumbrical muscles on the cubital side (Have you noticed that your fingers are “pinky-oriented when you hang from a crimp?) and increase the risk of developing wrist pathologies (such as Quervain’s tenosynovitis) due to overuse of the thumb while maintaining an excessive ulnar flexing position on the wrist.

So, keep this in mind, “what it is not trained does not generate adaptations, and what doesn’t adapt is quite likely to end up in an injury (or has a bigger chances of doing so)”,  training badly also has greater risks.

The App does not incorporate this way of gripping, not because the should not be trained, just because it is linked to the R-Evolution Training Board, and this does not have any hold to train this type of grip in the correct way, as we have been discussing so far.

The safest and most effective option to do so is in standing on your feet, with your arms facing the floor and the wrist in neutral position (like a Playmobil, see the picture below). 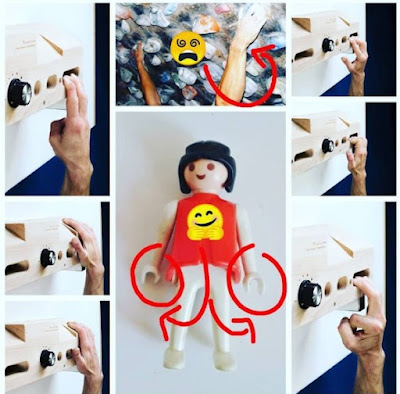 However, not having this type of grip in the App does not mean that you cannot train it.

In order to do so, here is an idea though! you can use the Workout Editor. Just add one more grip type (or more than one if you train several types of pinches) to the training you want (either preconfigured or created by yourself from scratch) JUST REMEMBER THAT THE GRIP/S YOU’VE ADDED WILL WORK AS A PINCH.

Finally, do not forget to select “Dead hang to 1 hand”  in the Workout Editor on that particular type of grip, so you can record differentiated weights for each one (since they will not always match).

FAQ-16: How many reps do I have to do on the max strength workouts?

As explained in that specific text of the “APP USAGE GUIDE” (link here) this magnitude is individual (although it is usual to do in between 5 to 10 reps MAX by type of grip, depending on your training level).

The FUNDAMENTAL THING on these sessions is to LEAVE A BUFFER MARGIN of extra seconds (in each repetition) that you could do if you would have continued dead hanging until failure, this means that, you must FINISH each dead hang/repetition BEFORE FAILING, always respecting that margin of seconds until failure (as many seconds as the App indicates).

This margin (which varies according to the level of training) is also known as seconds (or repetitions) in reserve or Effort Margin (EM).

The reason to train strength WITHOUTH reaching FAILUIRE is because there is evidence that has the same benefits strength wise as training reaching failure, so, on top of that:

⚫ it allows to make more time under tension in a global way (achieving a greater stimulus on the force).

⚫ it decreases the risk of injury (by working beyond the limit).